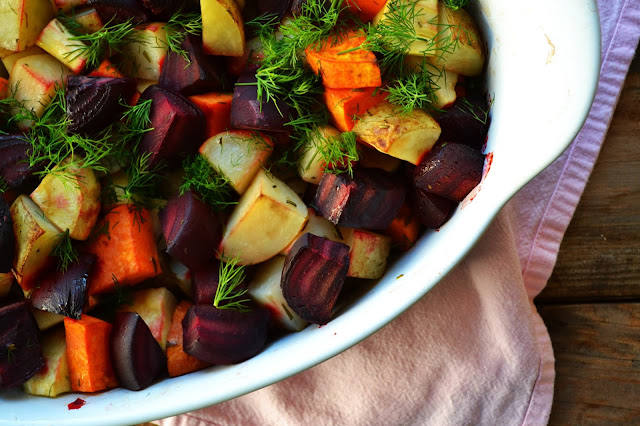 Once upon a time, there were four root vegetables and two herbs. An evil home cook tossed them in olive oil and salt and roasted them in the oven. Then they all lived happily ever after.

I've made variations on this dish a few times over the last couple weeks - twice for family dinners and a third time for a neighbourhood brunch. It's a useful side dish as it goes with practically anything, and it tastes fresh and wholesome. The colours are oh so beautiful too. It reminds me of f... it reminds me of f... okay, I'm gonna say it... FALL. Ahh!

Yup, it's back to school this week and fresh routines. New friends, new teachers, same familiar walk to school with the kids. Somehow the school routine makes getting dinner on the table feel a little tougher, so these root vegetables will likely make another appearance on the dinner table later in the week. The best part is they can be reheated for our side at dinner the next night too. Handy. 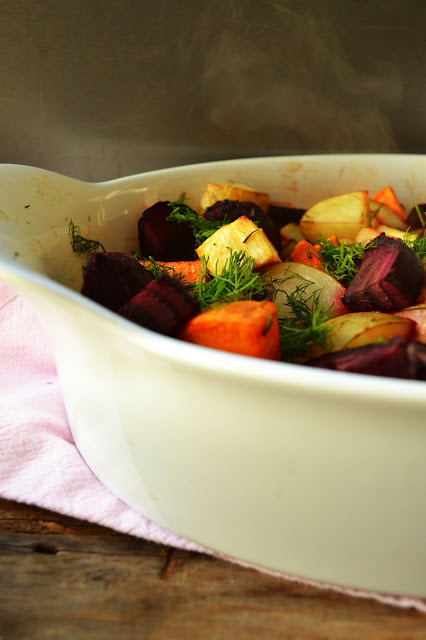 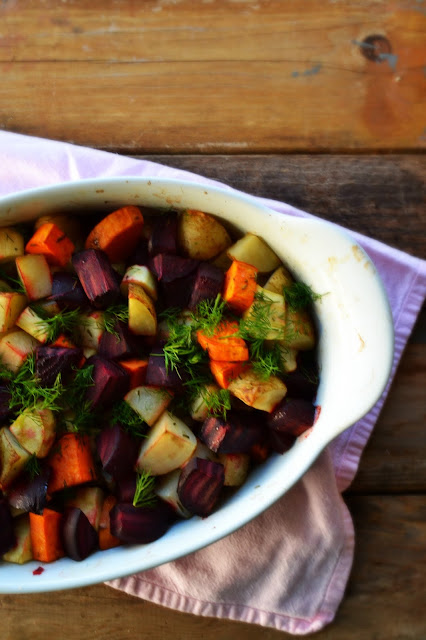 Here's how I made it:
makes 6-8 side servings

I started by boiling the beets in a large pot of water for 30-35 minutes. They were transferred to a large bowl of cold water to cool enough to handle, then I pulled the peels off and chopped the beets into 1-inch pieces and set aside. The remaining root vegetables were combined in my largest baking dish (10 x 16 inches but two smaller baking dishes would work too). The roots were tossed with the olive oil, salt and rosemary. Then I added the beets and tossed again, gently, to prevent everything from turning pink. The dish baked, uncovered, in a preheated 400 degree (F) oven for 45-50 minutes until the roots were tender. The chopped dill was sprinkled on when the dish came from the oven.