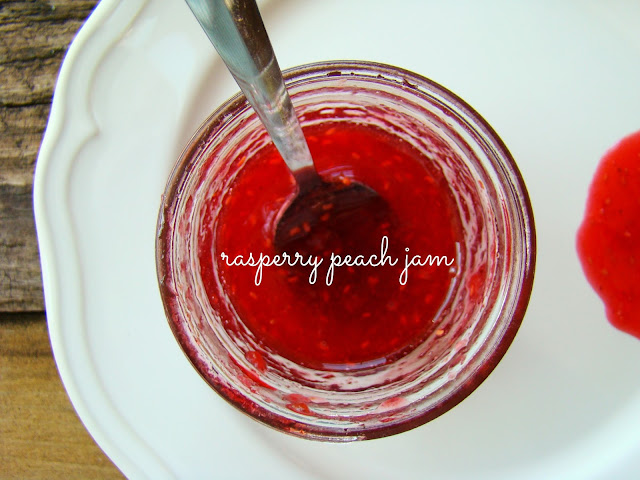 Mid-summer and suddenly I'm a book worm. It started innocently with a trip up-island and a lazy browse through a quirky used book shop. After asking the clerk for some new historical fiction recommendations and getting several suggestions for stories about plotting queens and courtiers, disloyal dukes and women who rise from small villages to take their place on the arm of a king-to-be (Kate isn't the first), I left with something not even closely related to what I'd asked for. It just sort of caught my eye. Straight up chick lit. With a pink cover and everything. And the word 'diva' in the title. I cut through each page like a hot knife through butter and enjoyed every lazy page. It was summer reading at its finest. It didn't ask much of me other than to root for the protagonist and hope for a tidy, happy finish after some heart-fluttering romantic tension, which is what I got. I was sad when I had to close the book on those characters for the last time, so I got another chick lit novel with more pink on the cover and devoured it too. Then another. Suddenly I'm a reader again.

I'm still finding time to put food in jars between chapters. I've canned 40 pints of garlic dill pickles already, with more cucumbers still to come off the plants in the garden. Now into peach season, I was looking to write a new jam recipe that makes the most of those sweet and juicy British Columbia peaches. I decided to go with the addition of some local raspberries to add a complimentary flavour and some eye-catching colour, because a jar of jam, just like the cover of a summer read, should hint at fun inside. Raspberry peach jam could very well be the chick lit of jams. 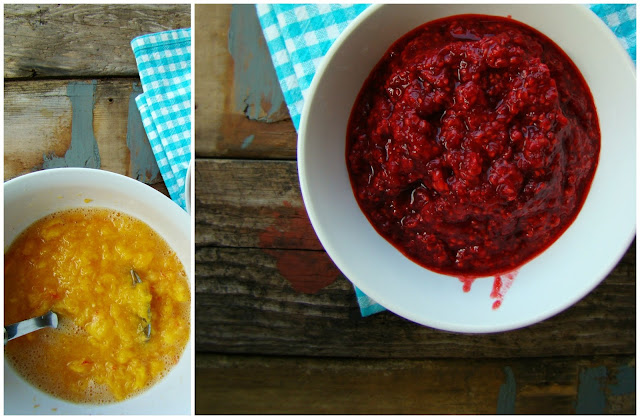 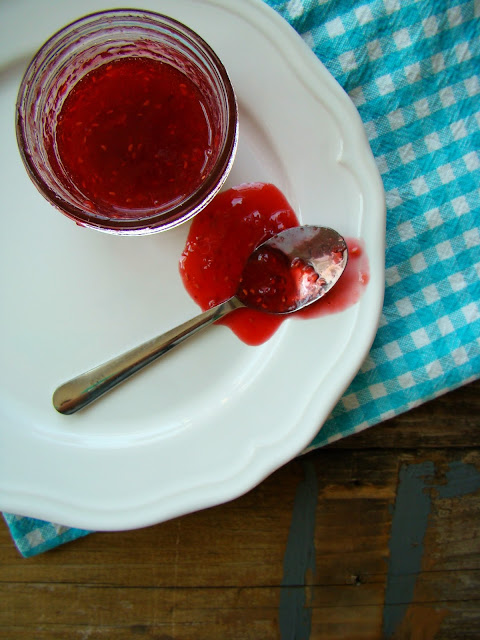 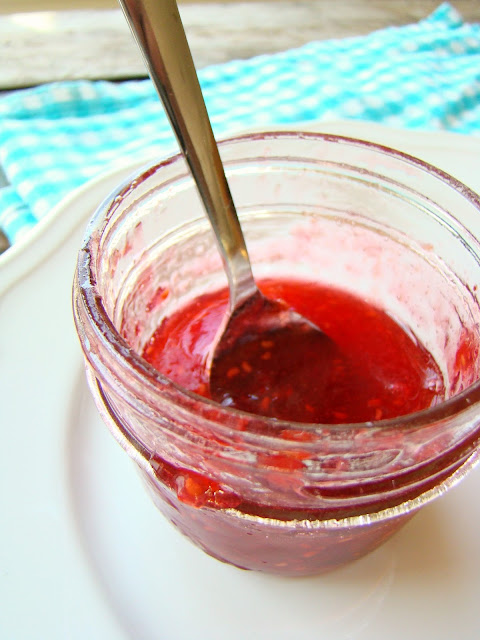 To prepare:
Here's how I made it:
makes enough to fill 7 half-pint/250 ml mason jars

I crushed the raspberries in a mixing bowl with a potato masher and set them aside (there should be about 1 3/4 cups crushed berries). Using a knife, I scored an X on the bottom of each peach and put them into the boiling water for three minutes. The peaches were then plunged into a bowl of ice water to stop the cooking process and the skins were peeled off. Holding the peaches over a large mixing bowl, I pulled out the pits with my hands and mashed the fruit with a potato masher (there should be about 3 1/4 cups crushed peaches). In my largest pot, I combined the crushed raspberries, crushed peaches and the pectin crystals and brought the mixture to a boil over highest heat, stirring often. Once boiling, I added the sugar and brought the mixture back up to a full hard boil over highest heat. Once there, the jam boiled for another minute then was removed from the heat. I spent a few minutes skimming the foam from the surface and discarded it.

I ladled the hot jam into my hot jars, leaving a 1/4-inch of headspace, then wiped the jar rims clean with a wet paper towel. The discs were secured in place with the bands just until finger tight, and my jars are lowered into the rack of my already-boiling water bath canner, resting with the tops of the jars 1-2 inches below the water surface. The jars were processed (boiled) for 15 minutes at a full boil, then removed from the canner to a tea towel on the kitchen counter to form their seal and cool completely (the centre of the lid should stay down when pressed).

Are you reading any good books this summer? Is there any chick lit on your nightstand? Leave a comment and share your reading recommendations.