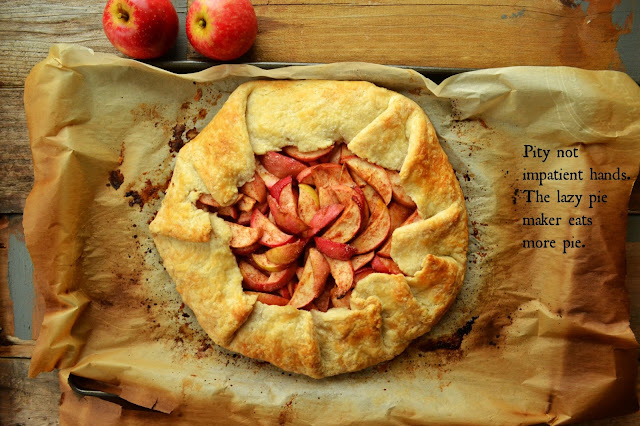 There isn't always time for fiddling with delicately fluted edges, but that's a tragic reason not to enjoy warm baked fruit in flaky pastry. This galette is apple pie without the fuss, no pie plate required. Call it rustic. Call it peasant food. It's simple and free-form and lovely. And it proves that sometimes impatience and wild whateverness can be more beautiful and more productive than careful precision. Pity not impatient hands. The lazy pie maker eats more pie.

I prefer the bottom crust on a galette to a crust baked in a pie plate. The heat of a baking tray, even when lined with parchment paper, creates a light crispiness under the warm apple cinnamon filling. To make sure the pastry holds its shape, this galette is baked on the low oven rack under high heat for ten minutes before being moved to the middle rack to finish baking at a lower heat. I left the skins on the apples in this recipe because it's easier and it's in-keeping with the handsome, country look of a galette. 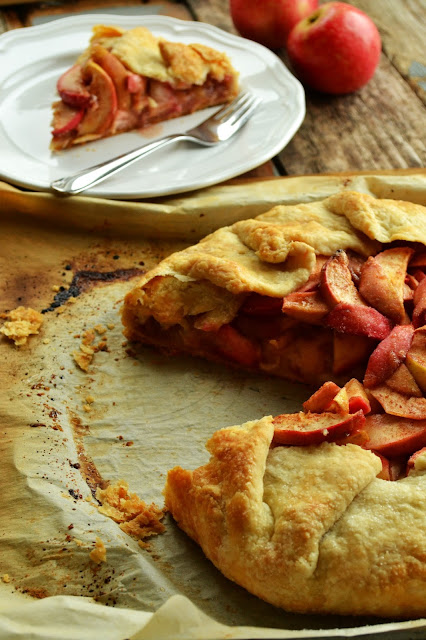 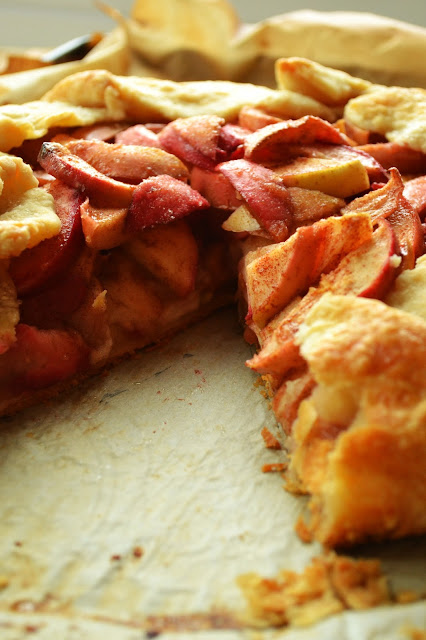 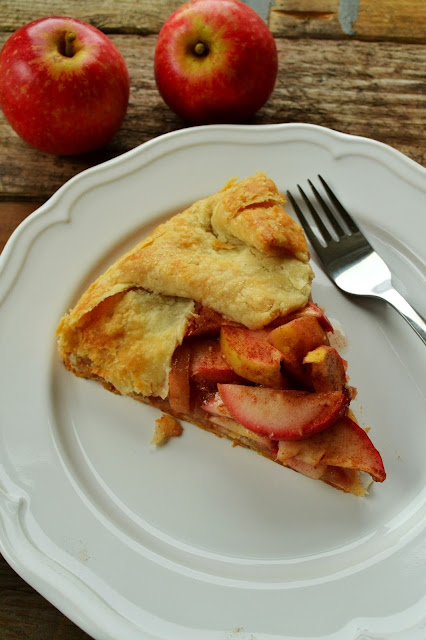 Here's how I made it:
makes 8 servings

To make the pastry, I added the flour and salt to a large mixing bowl. The butter was cut into the mixture using a hand pastry blender until evenly crumbly. In a small bowl, I beat the egg, water and vinegar with a fork, then poured it into the large bowl, stirring just to bring the dough together. I formed the dough into a ball and rolled it out on a sheet of parchment paper dusted with flour until it was 16-18 inches across. The parchment was lifted to carefully transfer the rolled dough to a rimmed baking tray (it's okay if some dough hangs over the edge of the tray).

To make the filling, I placed the apple slices in a large mixing bowl. In a smaller bowl, I combined the sugar, flour and cinnamon, then tossed the mixture with the apples. To assemble, the filling was poured onto the middle of the rolled dough and arranged to occupy a circular space about 10 inches across. The edges of dough were folded up and over the filling, leaving the middle exposed.

For finishing (optional), I brushed the pastry with milk and sprinkled with sugar.

The galette baked on the baking tray at 425 degrees (F) on the low rack for 10 minutes to firm up the bottom, then I lowered the heat to 350 degrees (F) and moved the tray to the middle rack, baking for another 50-55 minutes until the pastry was golden and the filling was bubbling.

What's the last thing you made with apples?