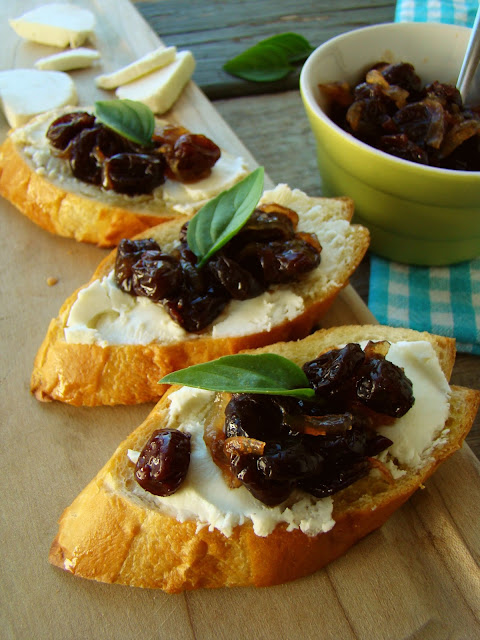 Disclosure: The Cherry Marketing Institute invited me to attend a three-day educational tart cherry immersion event in Traverse City, Michigan. My travel and lodging expenses were covered by the Institute. My love of tart cherries is pure free will.

America's tart cherry country, otherwise known as Northern Michigan, is a land of rolling farm hills that tumble down to sandy beaches and the crystal blue shoreline of Lake Michigan. Row upon row of tart cherry orchards dot the scenery, their ruby-red fruit dangling like juicy gems in the summer sun. The moderate temperatures off the great lake make it possible to grow 70 to 75 per cent of U.S. tart cherries in the region each year, which makes it pretty much a dreamland for pie-makers and preservers like me. I had to fight the urge to go running through the hills with a gingham-lined basket and a goofy smile, collecting pounds and pounds of fresh cherries for homemade pies.

Despite the serenity of the surroundings, there's a lot going on in those hills when the cherries come ripe in July. At Cherry Bay Orchards, a family farm that spans 3,000 acres and several decades, crews work day and night to harvest 4-million pounds of tart cherries each year. It's a big job that's made faster by the use of mechanical harvesting. One machine gives the tree a vibrating shake, lasting mere seconds, while another machine catches the falling cherries on a conveyor belt before moving them to large bins of cold water to be trucked to a facility where they are rinsed with even colder water. If left as they are, tart cherries will begin to brown within a couple days, so over 99 per cent of the harvest is moved to processing within 24 hours, eventually ending up in grocery stores as frozen, dried and juiced cherry products.

Our tour group, made up mostly of dietitians and food bloggers (including the delightful and talented Faith Durand of TheKitchn.com and Gaby Dalkin of WhatsGabyCooking.com), made our way through orchards, information, and more cherry-studded meals than I thought was possible. We were spoiled and a stop at Cherry Republic, a farm-themed cherry village where the motto is 'Life, Liberty, Beaches and Pie,' was the cherry on top. The restaurant serves cherries in every menu item, and the shop sells everything from cherry salsa and cherry jam to t-shirts and mugs that celebrate everything cherry. Essentially, these are my people.

There's a lot to be said for tart cherries. We've all heard about the health perks, such as their anti-inflammatory properties and relief of arthritis and gout. But, me being me, I'm mostly interested in how delicious they are. My favourite way to bake and cook with them is in their dried form. They are fabulously versatile and right at home in both sweet and savoury dishes.

This appetizer recipe for tart cherry chutney and goat cheese crostini combines tart, sweet and spicy flavours and blends creamy and crisp textures. The chutney is made quickly in a pan and left in the fridge until ready to dollop onto warm slices of toasted baguette spread with cool goat cheese. Each bite is a celebration of this unique super fruit. 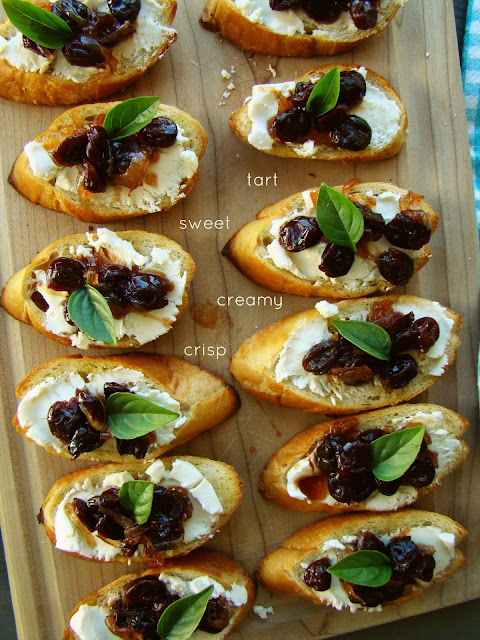 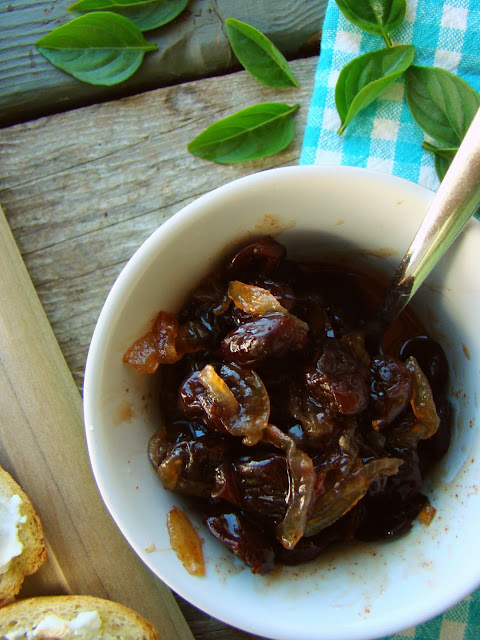 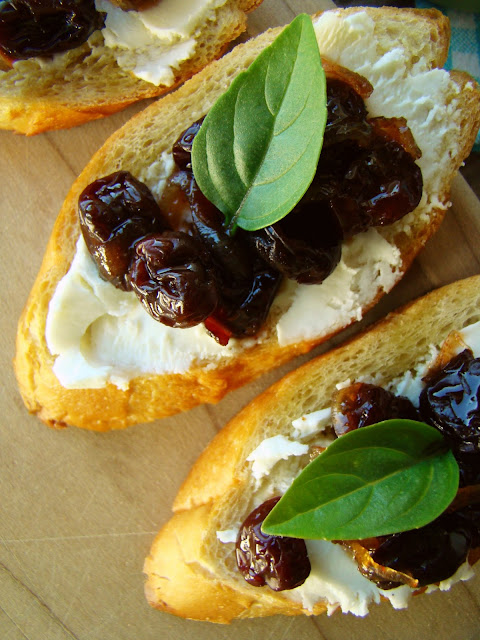 Here's how I made it:
makes one dozen crostini

To make the chutney, I heat the onion in a non-stick skillet over medium-heat just until beginning to soften. I added the cherries, vinegar, sugar, cinnamon and cayenne and brought the mixture to a boil. The heat was reduced to medium and the chutney was simmered, stirring often, until thickened and slightly sticky (about 10 minutes). The chutney was transferred to a bowl and set aside in the fridge until ready to assemble the crostini.

To assemble the crostini, the baguette was sliced on an angle into 12 1-inch slices, which were placed on a baking sheet. The pieces were drizzled and tossed with the olive oil before going in a 400-degree preheated oven until golden brown (about 5 minutes). The goat cheese was sliced into 12 equal pieces and spread onto the toasted bread. The chutney was spooned equally over the goat cheese and each piece was topped with a basil leaf. 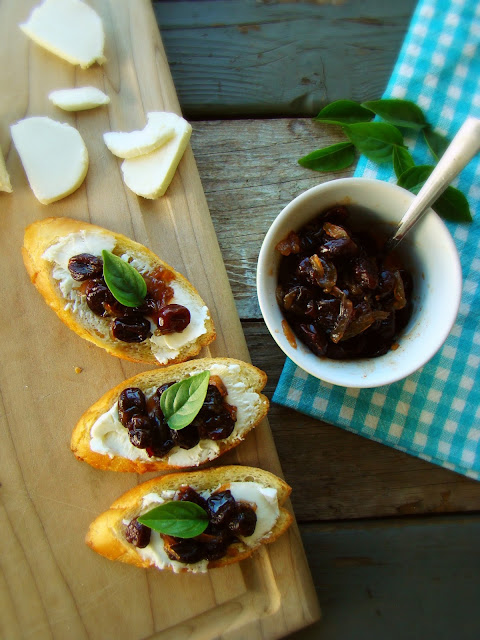 Leave a comment. What's your favourite way to use tart cherries?