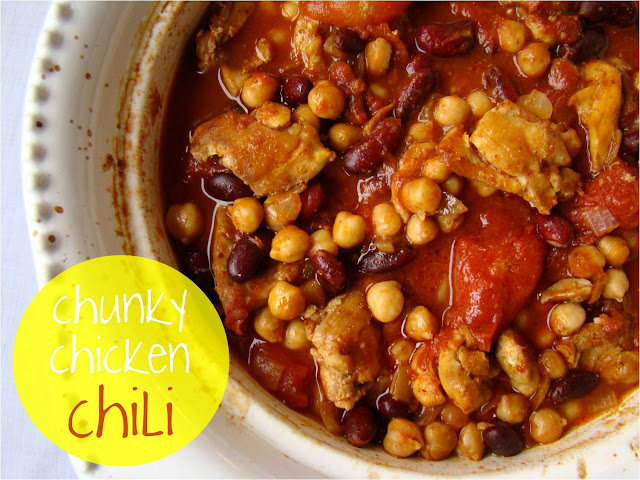 I hadn't set out to make chili to when this became dinner. I had planned on making sweet and sour chicken and was chopping up my chicken when I realized I was short a critical ingredient. There was no way I was going to hustle out to the grocery store for one item. So I opened the cupboard and started brainstorming. I grabbed a can of kidney beans, some chickpeas, some canned tomatoes. Over at the spice shelf I grabbed some chili powder, cumin, and cayenne, and set to work on making a chicken chili.
Sometimes when I'm forced to work a little harder a tasty result feels extra rewarding. And this chunky chicken chili is super tasty! 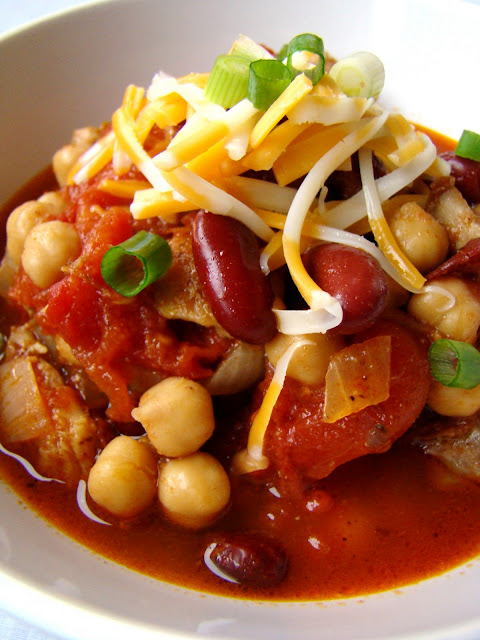 Here's how I made it:
2 lbs boneless skinless chicken thighs, cut into quarters
1 cup onion, diced
1 can (796 ml/28 fl oz) whole tomatoes
2 tsp chili powder
1 tsp ground cumin
1/4 tsp cayenne
1/2 tsp salt
1 can (540 ml/19 fl oz) red kidney beans, drained
1 can (540 ml/19 fl oz) chickpeas, drained
1 green onion, chopped, for garnish
1/2 cup grated cheese for garnish
While my oven preheated to 375 degrees (F), I added the chicken pieces to a non-stick frying pan over medium-high heat. Once the chicken was cooked through, I drained off the released liquid and continued cooking until the chicken was golden brown. I transferred the chicken pieces to a large casserole dish with a lid and set it aside. The heat of the frying pan was lowered to medium and I added the diced onion, cooking just until soft. The canned tomatoes were added to the pan next (including the juice), and I stirred in the chili powder, cumin, cayenne, and salt while breaking the tomatoes in half with my wooden spoon. Once the mixture came to a bubble, I poured it over the chicken. The drained kidney beans and chickpeas were poured into the casserole dish last and the whole mixture was given a big stir to combine. The chili baked, covered, for 45 minutes.

The house smelled amazing while this cooked, but the flavour packed in this chili was even better. Delicious! I served it with chopped green onion and grated cheese, but some other tasty toppers could be a dollop of sour cream, guacamole, or a few tortilla chips. 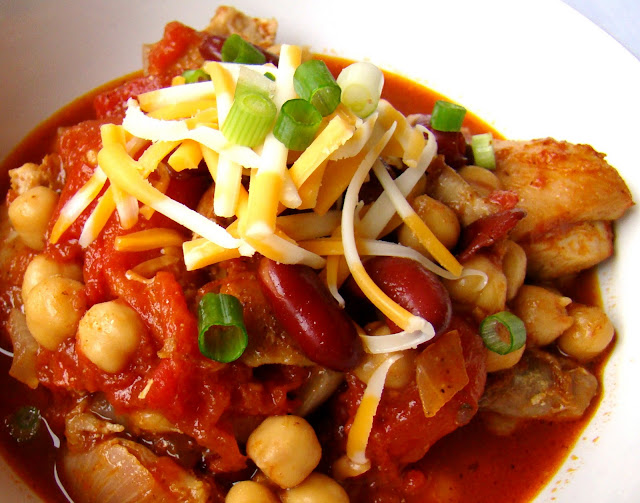 This chunky chicken chili may have been spontaneous the first time, but I'll be making this one again. And again.
What's the best spontaneous meal you've made? What do you like to put in your chili? Got a fave chili recipe? Share the link in the comments!