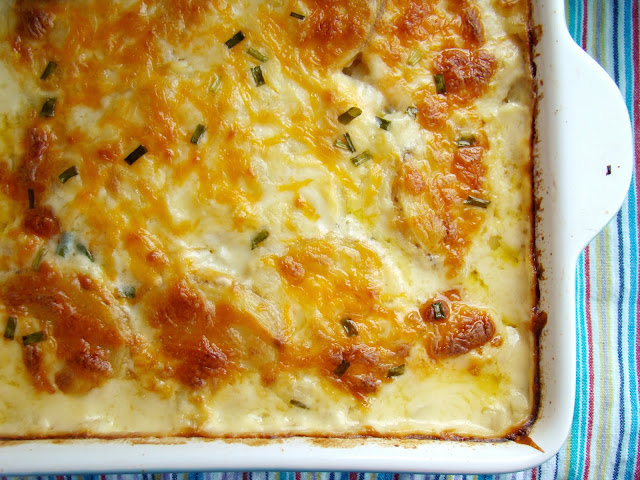 Oh my goodness gratin, these are good! Tender potato slices smothered in a creamy garlic cheese sauce, baked until brown and bubbly. There's no denying that cheese, plus potatoes, plus cheese, plus whole milk, plus cheese, plus garlic, plus a whole lot more cheese just rocks my socks. There's also no denying that this dish works perfectly as a side for anything from ham to meatloaf to fish. And I love versatile! These potatoes were joined on our Sunday night dinner plates by grilled marinated steaks and zucchini. 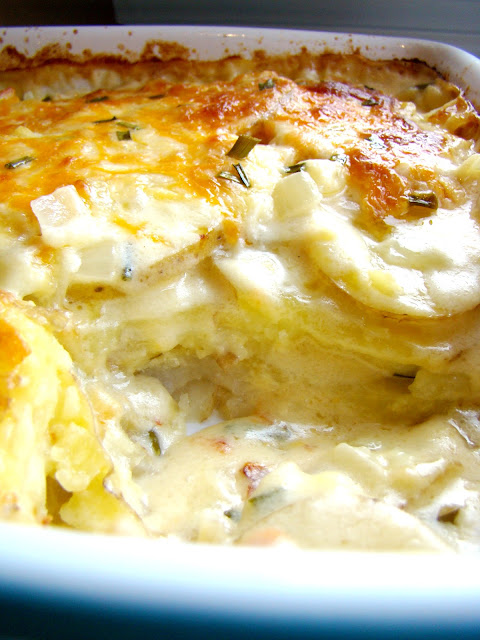 Here's how I made them:

I started by preheating the oven to 375 degrees (F). To make the sauce, I melted the butter in a medium saucepan over medium heat, then the diced onion was cooked in the melted butter until soft. Next, I stirred the flour thoroughly into the onions and added the milk and garlic using a garlic press. The sauce was stirred over medium/high heat until it began to bubble and thicken. I removed it from the heat and stirred in 2 cups of the grated cheese. The sauce was set aside.

Next, I fwazzed a deep 9x9 ceramic casserole dish with some cooking spray. A single layer of potato slices was layered in the bottom of the dish, followed by a sprinkling of snipped chives. Another layer of potato came next, followed by more chives. I continued like this until the potatoes were used up.

The sauce was then poured over the potatoes and the whole thing was given a good shimmy shake on the counter top to get the sauce to ooze down into all the nooks and crannies. The top was sprinkled with the remaining 1/4 cup of cheese and another sprinkling of chives. I then placed the casserole dish on a baking sheet in case it bubbled over (it didn't) and baked it for 60 minutes until brown and bubbly. 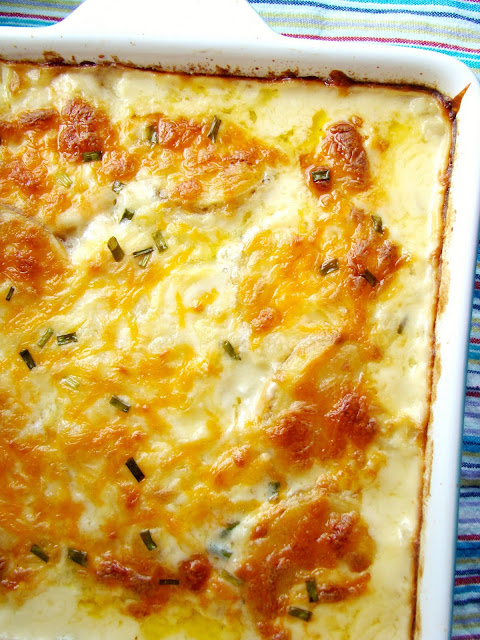 This is good ol' home cookin'; the kind of food that reminds me of family dinners as a kid. And the best part is there's a whole lot leftover for another night's dinner.

Are you a fan of scalloped potatoes (or are you from a different planet altogether?) What do you put in yours? What kind of cheese would you use in this dish?